ACROSS FROM HERITAGE TOYOTA, CHRYSLER JEEP. IN SHOPPING CENTER WITH KARN'S AND PLANET FITNESS 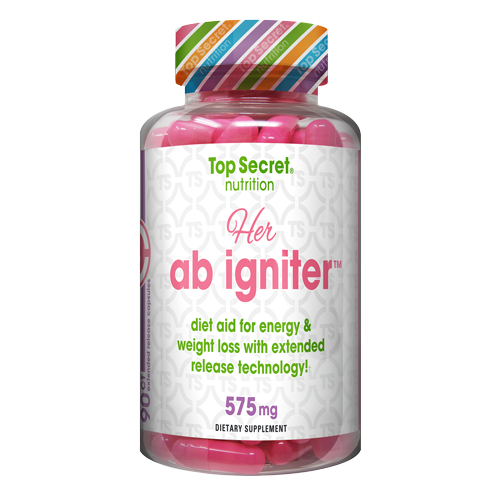 AB IGNITER™ represents a major leap forward in nutraceutical supplements for improving health and fitness. Top Secret Nutrition has launched the next era in weight loss aids by combining: Crash-less energy stimulators, Heat-generators, Patent-pending weight loss aids, and Mood boosting botanicals. If you want to experience the benefit from the most advanced weight loss aid on the market, then Ab Igniter™ is for you.

Since the controversy with ephedrine began several years ago, companies have searched high and low to find an alternative ingredient for their weight loss products. Senegalia Berlandieri is not only such an alternative, but it may actually be superior to ephedra*. Thermo-Rx® is a unique proprietary plant extract derived from Senegalia Berlandieri. This highly purified plant extract is is standardized to 95% phenylethylamines. The four phenylethylamine alkaloids are chemically similar to ephedrine alkaloids. Phenylethylamine (PEA) is considered by chemists to be the top choice of all stimulants because it is structurally clean and because of its ability to elevate the mood and provide an overall sense of well-being. The alkaloid profile in Thermo-Rx® is unmatched by any other Senegalia species due to its phenylethylamine content, as well as numerous other alkaloids and amines.

AB IGNITER™ utilizes phenylethylamine whichis a sympathomimetic amine found in the leaves of Senegalia Berlandieri. Phenylethylamine also naturally occurs in chocolate, and is responsible for its effects on mood, appetite, and sense of well-being. Phenylethylamine is probably the cleanest stimulant ever researched. Its ability to stimulate the central nervous system without causing a nervous feeling or the "jitters" is remarkable. Phenylethylamine acts on alpha-receptors in the brain, as do norepinephrine and ephedrine. It is also believed by chemists and scientists in the industry to cause the release of dopamine in the pleasure sensing areas of the brain.

Senegalia Berlandieri is found in AB IGNITER™ and is just the answer the diet industry has been waiting on for years. AB IGNITER™ also contains the following: (1) Theobromine- it comes from Dark chocolate and cocoa products. Theobromine acts as a mild stimulant and diuretic in the body, and it is slightly similar to caffeine. (2) Green Tea Extract- it is a great source of antioxidants—called catechins—that help support immune function, cardiovascular health, and weight loss. (3) 5-Methoxytryptaine Hcl- also known as mexamine, is a tryptamine derivative closely related to the neurotransmitters serotonin and helps elevate your mood. (4) Yohimbine- works by increasing adrenaline levels in the body, as well as inhibiting a regulatory process in fat cells, which normally suppresses fat burning. Yohimbine is also a general stimulant, but works differently than caffeine. It also helps you sweat and rid your body of toxins. AB IGNITER™ is truly backed by science and a revolutionary Diet & Energy aid you will not find elsewhere. Try AB IGNITER™ today and you will begin seeing results immediately and you will lose weight and feel great!

FOR ALL YOUR SPORTS NUTRITION NEEDS